In California's government schools, even the official data shows that children are being turned into lifelong illiterates on an industrial scale — and at hefty taxpayer expense. Unfortunately, children all across America are being victimized by this. And the cause is hardly a secret, having first been exposed over 150 years ago.

The latest numbers from the California Department of Education tell a tragic tale. According to an analysis of the data by CALmatters, less than one fourth of black boys meet even the dumbed-down Common Core standards used by today's government schools. More than half of them scored in the lowest possible category, suggesting they are unable to read even the most basic material.

Among Hispanic boys, less than a third met the dumbed-down government standards in English. And among whites, while the numbers are slightly better, more than 40 percent failed to meet even the basic standard. In every grade except 11th, less than 50 percent of students met the literacy standards, which again, are dumbed down to the extreme.

But the tragedy is hardly unique to California. In Washington, D.C., the nation's capital, a stunning two thirds of residents over the age of 15 are functionally illiterate, according to a State Education Agency. Federal data shows more than half of Americans can barely read, or cannot read at all, scoring in the bottom two categories out of five.

The California researchers, as usual, turned the latest shocking numbers into a story about “race” and “gender.” But the real story is not so much about which race or sex is being dumbed down the most. Instead, the horror is the fact that countless millions of American children of all races and both sexes are being handicapped for life by their overpriced government “education.”

And as if that was not a serious enough scandal, the primary cause of this disaster has been well known ever since the Boston school masters chastised Horace Mann for it in the 1840s. A hundred years after that, Rudolf Flesh blew the whistle in Why Johnny Can't Read. And Dr. Samuel Blumenfeld, who co-authored a book called Crimes of the Educators on the subject with this writer, dedicated his life to exposing this monumental crime. 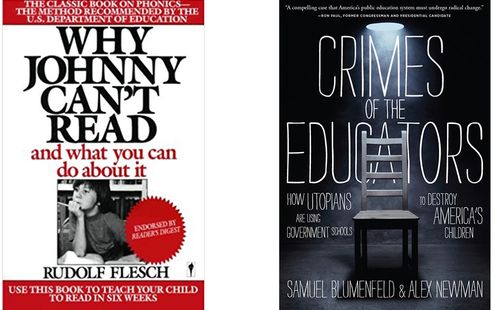 The reason for this ongoing tragedy is simple. According to the Common Core standards (and the methods in use before them), children must start memorizing “sight words” in Kindergarten. Other terms for this quackery include the “look-say” method, the “whole word” method, and so on. Basically, it involves teaching children to approach English words as if they were Chinese symbols.

By the time the children get to first grade and are introduced to phonics, the damage is already done in millions of their little minds — especially if their parents never taught them the basics at home. Because of the “whole word” quackery, their brains develop a reflex to look at a word as a whole symbol to be memorized, rather than a series of symbols, each one representing a sound that can be blended together and sounded out.

What these children need is not more tax money, smaller class sizes, more LGBT sensitivity training, more interventions, more amphetamines, more dumbed-down “standards,” or bigger government. What they need is basic, remedial reading instruction that teaches them systematic, intensive phonics. Until this is understood and demanded by the American people, the education establishment will continue turning tens of millions of innocent children into functional illiterates for life, with all the pain and horror that entails. It needs to stop, now.
Posted in The Newman Report

Katie Is Jacked Up About AOC’s Rant
The Church In America Must Be The Church!
President Uncle Joe Wants You Deprogrammed
3rd Graders Forced to “Deconstruct” Racial & Gender Identity
Democrats 2021: New Year, No Rules