Extremist “sociology” Professor Dae Elliott at San Diego State University is facing national criticism and ridicule after giving students a “White Privilege Checklist” to help them determine their supposed level of “privilege.” The racist document, which was offered as extra credit, also informs students about their alleged privilege based on “gender, sexual orientation, class, and religion.”

Other listed indicators of “white privilege” include going shopping without being harassed, turning on the TV and seeing people of one's own race, being sure that one's children will “be given curricular materials that testify to the existence of their race,” being able to “count on finding the music of my race,” finding food one grew up with at the shop, being late to meetings “without having the lateness reflect on my race,” and more.

Apparently, whoever wrote the document was more concerned with pushing racial division than proper spelling and grammar. “I can easily by [sic] posters, postcards, picture books, greeting cards, dolls, toys, and children’s magazines featuring people of my race,” the document reads as yet another indication of “white privilege.” Seriously.

Having band-aids that match one's skin color is also apparently an indicator of “white privilege.” Being “sure that the majority of my professors will be of my race” is also a supposed indicator, which would appear to prove that the document discriminates against historically black colleges unless students there also have white privilege. 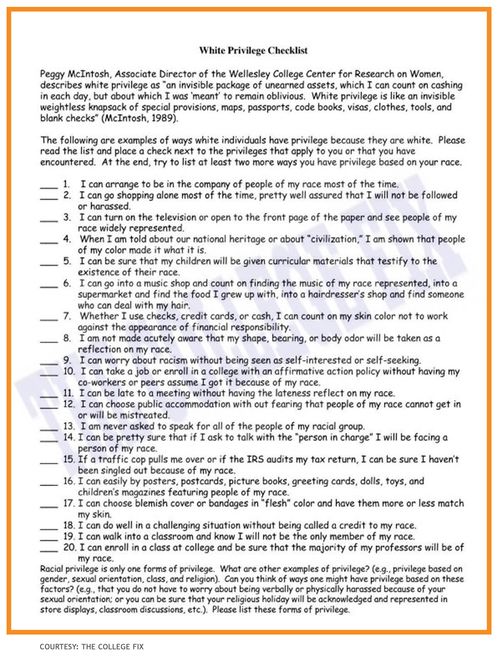 In a ridiculous statement offered to The College Fix, which first reported the scandal, the professor, sounding like somebody who belongs in a rubber room, tried to justify the racist exercise.

“Only through processes that allow us to share intersubjectively, weigh all of our perspectives according to amount of shareable empirical evidence can we approximate an objective understanding of our society,” she said. “It may never be perfect, in fact, I am sure we will always be improving but it is a better response if we are truly seekers of what is truth, what is reality.”

Conservatives on campus, though, were quick to ridicule the race-mongering and the racist view that people are victims simply due to their melanin content.

“This is another attempt by the left, and Professor Elliot to divide America,” San Diego State University College Republicans President Brandon Jones was quoted as saying in media reports. “The left’s political goal is to ensure that minorities in America perpetuate that their primary problem is white racism. This only furthers the portrayal of minorities in America as victims and does nothing to help contribute to their advancement in society.”

The first two reviews of Professor Elliot blasted her as the “worst teacher ever.” Unfortunately, though, she is merely one among countless racist kooks across America leeching off taxpayers while indoctrinating dumbed-down victims of government school.

As The Newman Report documented last month, even young children are being subjected to this sort of hateful abuse by government-school teachers. And ironically, in California, where this lunacy occurred, 50% of victims of government schools cannot even read proficiently.

This is what a college “education” has come to in America today — at least in most government-linked institutions of alleged higher “learning.” Any parent thinking of sending their child to a government school, including college, should think again.
Posted in The Newman Report

Censorship Is Here And They’re Coming for You
Teachers Told to Hide Curricula From Parents, Create Phony Materials
How The Left Is Canceling Christianity
Biden Rule Pushes Critical Race Theory On Schools
WE GOT BANNED!