Even after a national uproar, government schools across America are still bringing in “drag queens” to indoctrinate children into gender ideology by reading bizarre LGBT “stories,” according to the website of a drag-queen organization that specializes in brainwashing youngsters at taxpayer expense. Public-school teachers have been openly praising the program after exposing their students to it.

Perhaps the most infamous “Drag Queen Story Hour” event took place at the Michelle Obama Library in California. At that event, a drag queen called “'Xochi Mochi” with five demonic horns sticking out of its head read an LGBT-themed story to children as young as 2 and 3 years old. “It’s so important to have representation and normalize all the letters in LGBTQIA+ in everyday lives,” explained the drag queen on Twitter. 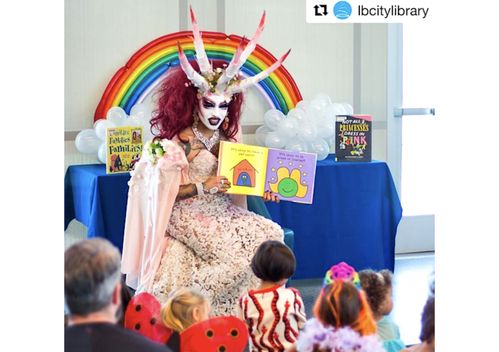 One of the government schools that invited grown men dressed up as women to spend time with young children was the Maurice Sendak Community School in Brooklyn, New York. According to media reports and a testimonial on the Drag Queen Story Hour’s website, first-grade teacher Alexis Hernandez loved the drag-queen scheme's attack on biological reality and traditional morality.

“Drag Queen Story Hour gave my first graders a fun and interactive platform to talk and think about social and emotional issues like acceptance, being yourself, and loving who you are,” Hernandez was quoted as saying in a testimonial. “During our debrief … [students] were preaching the incredible lessons they had learned, like ‘it’s OK to be different,’ and ‘there’s no such thing as 'boy' and 'girl' things.'”

Meanwhile, at the Chickpeas Preschool in Brooklyn, “teacher” Katrina Green was exposing even younger children to the bizarre spectacle. The Drag Queen Story Hour “allows preschool children to deepen and complicate their ideas about gender at the exact age when they are often developing rigid ideas about this concept,” Green was quoted as saying.

It was not immediately clear whether parents were consulted prior to exposing the preschool and first-grade children — ranging in age from 3 to 7 years old — to the highly controversial spectacle of a grown man dressed in female clothing reading pro-LGBT stories. But Hernandez vowed that there would be a Drag Queen Story Hour at her school next year, too.
On the DQSH website, the group describes what it does thus: “Drag Queen Story Hour (DQSH) is just what it sounds like — drag queens reading stories to children in libraries, schools, and bookstores. DQSH captures the imagination and play of the gender fluidity of childhood and gives kids glamorous, positive, and unabashedly queer role models.”

Critics, though, spoke out. “Many of these events actually take place within our public schools,” explained Sean Fitzgerald in a video working with the David Horowitz Freedom Center and stopk12indoctrination.org. The goals of the program include teaching children that the notion of male and female was concocted by a "hateful" society, he added.

"Now we're talking about public school children deliberately targeting children with their own progressive ideology,” Fitzgerald continued, adding that the number of gender-confused students was increasing nationwide. “And if you're not sure that's actually what's happening, you're not paying attention.”

Just a generation ago, sending in demonically themed drag queens to brainwash children into supporting homosexuality and the objectively false notion that male and female are societal constructs would have been almost universally regarded as child abuse. Today, it's what passes as “education” in government “schools.” And if you think this is where it ends, you “ain't seen nothing, yet.”
Posted in The Newman Report