Just weeks before Christmas, first-grade students at a school in Aurora, Colorado, learned all about the Islamic holy day Ramadan, which commemorates the first supposed revelations given to the Muslim prophet Muhammad. But they learned nothing about Christmas.

As part of the lesson, the first-grade students at the tax-funded school were ordered to decorate Islamic prayer rugs and learn about the Muslim deity while studying the significance of Ramadan. Worksheets handed out to children described the Islamic deity as “most merciful” and “most gracious.”

One of the worksheets, created by “Raki's Rad Resources,” instructs children that “two symbols of Ramadan are the crescent moon and the star.” The students, aged between 5- and 7-years old, are then instructed to “design and color this [Islamic] prayer rug using a crescent moon.” 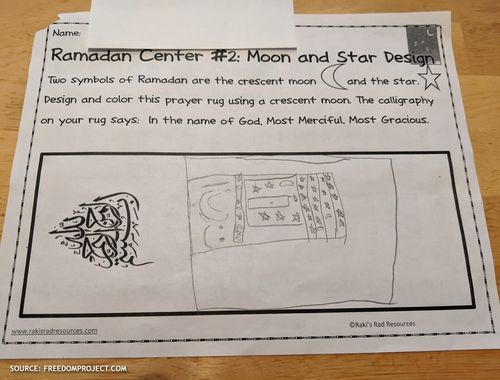 Part of the Islamic prayer rug children are supposed to color and decorate includes Arabic calligraphy. “The calligraphy on your rug says: In the name of God [Allah], Most Gracious, Most Merciful [sic],” the worksheet explains. Students were not taught about the many differences between the God of the Bible and Allah, the deity described in the Islamic holy book known as the Koran.

Another worksheet, part of the same lesson plan, featured 30 different blank prayer rugs, which students were ordered to color using different “patterns.” One group was supposed to include the “AAB pattern,” another the “ABC pattern,” and the last group was the “ABB pattern.” 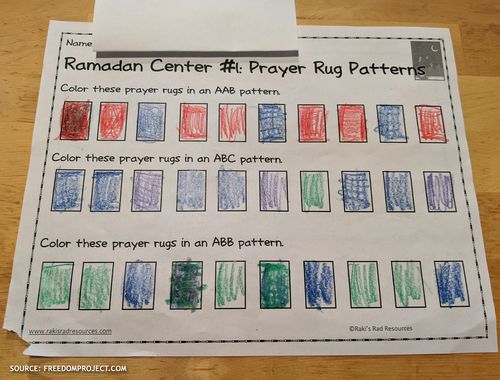 In solidarity with Muslims, who fast during Ramadan as part of their religious traditions, a third worksheet given to the first graders instructed them to “Write about a time when you have had to wait.” Students were supposed to sympathize with Muslims, who must go from sun up to sun down without eating for the entire month of Ramadan. 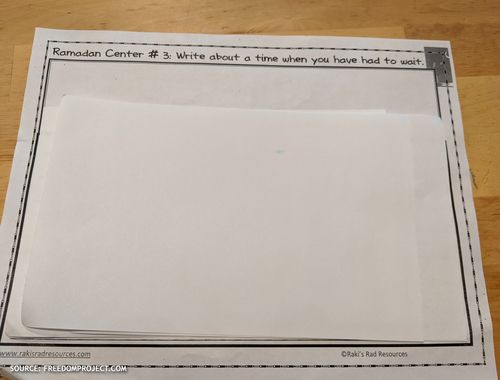 A “horrified” and “sad” parent whose child is in first grade at the tax-funded charter school in Aurora, Colorado, shared pictures of the worksheets with FreedomProject Media. It was not immediately clear whether the charter school in question is owned and operated by the infamous Turkish-Islamic cleric known as Gullen, who operates an estimated 120 charter school funded by taxpayers.

The parent who blew the whistle asked the child whether Christmas was discussed during the lessons at school. It was not. However, the child was somehow led to believe that Muslims “pray to Jesus on those rugs,” the parent told FreedomProject, expressing serious concerns.

It was not clear whether the teacher explained to the children that while there are a few similarities between the Islamic Jesus and Jesus Christ the Messiah whose life, death, and Resurrection are documented in the Gospels, there are very significant differences, too. For one, the Islamic “Jesus” is expected to return one day to slaughter all Christians and Jews.

Once upon a time in America, a Christian nation settled and founded by pious Christians, school children prayed to God in the name of the biblical Jesus Christ. They also read the Bible and learned God's moral laws, including the Ten Commandments.

Today, however, government schools all over the nation force captive children to engage in Hindu, Buddhist, and Islamic rituals. And instead of learning about Christianity, which is relentlessly demonized, they learn godless humanism and unthinkable perversion under the guise of “science” and “health.”

The Newman Report has been documenting the never-ending parade of non-Christian and anti-Christian indoctrination going on in government schools for years. Most Christian children will leave their churches after 12 years there, studies by the Nehemiah Institute show.

It should now be beyond clear to Christians, whose taxes fund the government education system and whose children are being destroyed by it, that there is a major problem.
Posted in The Newman Report

Censorship Is Here And They’re Coming for You
Teachers Told to Hide Curricula From Parents, Create Phony Materials
How The Left Is Canceling Christianity
Biden Rule Pushes Critical Race Theory On Schools
WE GOT BANNED!