Government school officials must interrogate children about their Thanksgiving gatherings to determine whether their families violated COVID19 decrees and met with people outside their households over the Holiday, Vermont Governor Phil Scott declared.

Children whose families defied government mandates not to travel or celebrate Thanksgiving with family and friends who do not live with them will be forced to stay "quarantined" in their house for two weeks. That means they can only attend online classes.

In a Twitter post on November 24, Governor Scott - a so-called "Republican In Name Only" (RINO) — said that the Vermont Agency of Education "will direct schools to ask students or parents if they were part of multi-family gatherings." 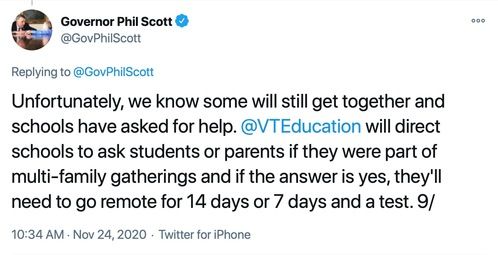 "If the answer is yes," continued the governor in a series of social-media posts, "they'll need to go remote for 14 days or 7 days and a test." In other words, if the families agree to take a highly unreliable and deeply controversial COVID test, they can shorten their government-mandated isolation by a week.

According to the Governor Scott, everybody in the state has the potential to be "the domino" that causes the coronavirus to spread. If there are enough of those "dominoes," then heath care facilities might be "at risk." In a worst-case scenario, 50 people could be hospitalized, warned one Vermont official.

And so, the governor and his administration asked the people of Vermont not to travel or get together with anyone outside their homes, even for Thanksgiving. If they had plans, he urged them to cancel. And then, he made the now-infamous threat to have schools interrogate children to enforce compliance.

Naturally, people across the state and beyond were outraged at the idea of weaponizing public schools to inform authorities about whether families are obeying arbitrary and lawless demands by government. In response to the governor's tweets, a slew of hilarious, snide, and highly critical remarks began flying.

One commentator noted that Communist East Germany, infamous for its barbaric "Stasi" secret police, was supposed to be a cautionary tale, not an instruction manual. Another mentioned the KGB and the Soviet Union. A librarian promised to give students copies of George Orwell's classic book 1984 instead of asking them to rat out their parents.

Several other commentators pointed out that "elites" such as California Governor Gavin Newsom were flagrantly breaking their own decrees. One responder even said if he were a Vermont resident, he would volunteer to park outside Governor Scott's home to ensure he doesn't "pull a Newsom" and go party maskless with lobbyists and friends at a fancy restaurant.

Others also highlighted the hypocrisy. "What if the families agree to do some mild rioting and wear a Biden/Harris hat?" Case Wright asked the governor sarcastically. Another respondent noted that COVID does not spread at such events, with "Eric," a third commentator, even pointing out that "experts agree rioting actually lowers infection rates." Indeed.

Responding to the tsunami of public anger and ridicule over the bizarre remarks, Governor Scott got defensive. When asked by an AP reported whether this order would put children in the position of "tattling on their parents," he claimed not to be sure whether it was really "tattling."

"This is fair warning," he was quoted as saying by local media. "If you’re planning on having gatherings outside your households, if you don’t want to have your kids in remote learning and quarantine for a seven-day period, maybe you should make other plans. I’m not sure it’s 'tattling' on anyone."

For anyone who has followed The Newman Report regularly, this Orwellian scheme in Vermont is hardly a surprise. In fact, nationwide, government schools have been giving children intrusive surveys gathering all sorts of highly private and sensitive information on their families. If not stopped by the American people, it will only get worse.
Posted in The Newman Report