FBI documents leaked by a federal whistleblower this week revealed that embattled U.S. Attorney General Merrick Garland, who sparked a firestorm by weaponizing the Justice Department against parents, lied to Congress in testimony about the issue last month. Calls for Garland’s resignation are growing louder.

Contrary to his sworn comments last month before a congressional committee, the newly leaked FBI documents show that the Biden-Garland Justice Department and FBI were indeed using highly controversial terror tools to target American parents outraged about indoctrination and Critical Race Theory. This included assigning a “threat tag” to parents by the FBI terror division.

The documents, obtained by the House Judiciary Committee, included an October 20 message to FBI officials nationwide from the heads of the Bureau’s Counterterrorism Division and the Criminal Investigative Division. Citing Garland’s memo targeting parents, the FBI bigwigs urged Bureau officials nationwide to track and monitor parents engaged in, among other alleged crimes, “harassment.”

The memo flies in the face of testimony offered by Garland in Congress. Among other comments, Garland repeatedly claimed no counterterrorism resources were being used or would be used to target parents concerned about their children being brainwashed. “It’s not even a close question,” Garland falsely told the House Judiciary Committee. 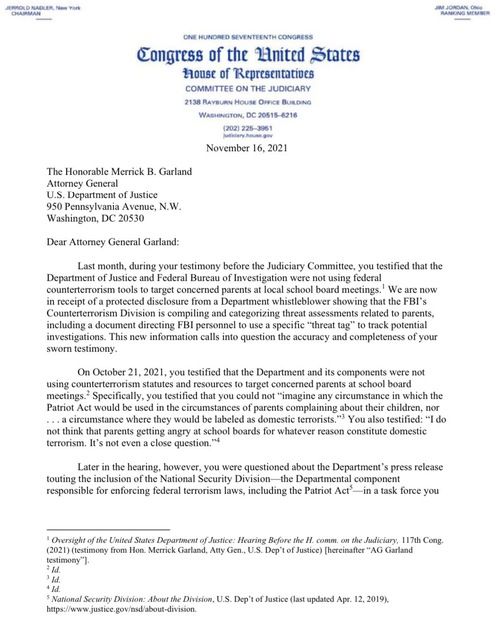 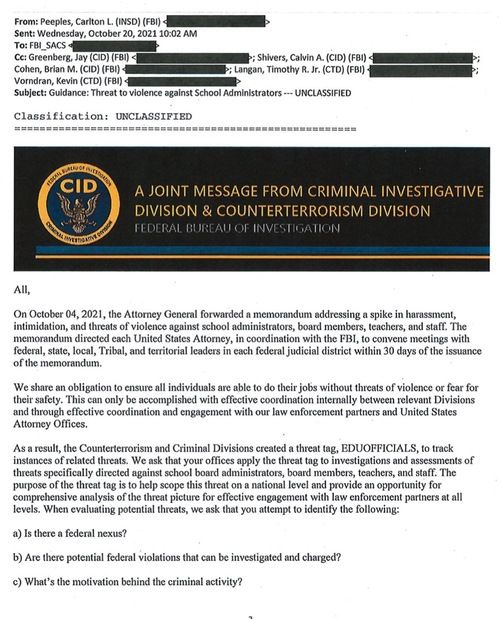 In a letter to Garland, House Judiciary Committee Ranking Republican Rep. Jim Jordan warned that the new whistleblower disclosure “calls into question the accuracy and completeness of your testimony." Said another way: It shows conclusively that Garland was lying or did not even know what his out-of-control minions were doing in response to his insane memo calling for probes of parents.

Rep. Jordan, a superstar Republican recently interviewed on FreedomProject Media’s Dr. Duke Show about education, had strong language on the possibility that it was deliberate. If Garland was aware of the FBI’s actions when he testified, "this evidence shows you willfully misled the Committee about the nature and extent" of the Justice Department's use of terror tools to target parents.

In response to the new revelations, Jordan and Republicans on the committee invited Garland to amend his false testimony. They also warned the scandal-plagued attorney general that seeking to punish the whistleblower who leaked the explosive documents was illegal and would not be tolerated by lawmakers.

In the U.S. Senate, lawmakers also expressed serious concerns about the new revelations. "If this is accurate, parents are getting the domestic-terrorist treatment after all," U.S. Senator Josh Hawley (R-Missouri) posted on social media about the news.

The scandal surrounding the Biden administration’s targeting of parents goes back to a letter by the National School Board Association painting outrage against radicalization, racism, and sexualization of children as a terror threat. After sparking a national outcry across the political spectrum and losing numerous members, the NSBA finally apologized. Garland has not.

The FBI and DOJ have now been reduced to clown-car status. On one hand, the Biden administration has deployed countless agents to terrorize parents, journalists such as James O’Keefe, and mostly peaceful January 6 protesters around the country. On the other, actual terrorists including ANTIFA and Black Lives Matter burn down cities, kill people, and take over police stations with impunity.

Resignations of people like Garland and others responsible for these outrages and absurdities are not enough. Instead, all of those responsible for this disgrace should be prosecuted for weaponizing the government against peaceful parents and political activists concerned about their children and their nation. Nothing less will do.

Ironically, one lunatic activist demanding that children be brainwashed with more crazy racist trash threatened this week that he had “1000 soldiers” who were “locked and loaded” if members of a Texas school board voted against CRT brainwashing. It remains to be seen whether Garland’s goon squad is investigating, but there is no doubt that any Texas sheriff is more than capable of handling it.

On the bright side, it has become clear that the education establishment and its allies in the far-left Biden regime massively miscalculated. The effort to intimidate and bully parents has backfired in a spectacular way. Instead of silencing the outrage, they have stoked unprecedented efforts to protect America’s children from the raging totalitarians running the indoctrination camps posing as “schools.”

The backlash is only just beginning.
Posted in The Newman Report

Supreme Court to Decide Whether or Not to Keep Murdering Babies
Joe And Dr. Science Panic Over New Variant
Parents ARRESTED & Terrorized for Speaking Out for Children
With ‘Build Back Better’ Bill, Biden Targets Tiny Tots for Brainwashing
Normalizing Pedophilia Is The Next Logical Stage of Rebellion